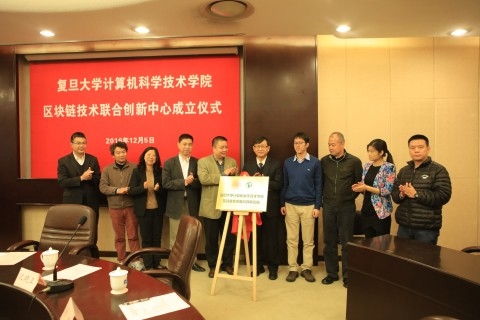 The Blockchain Innovation Center of the Fudan School of Computer Science (SCS), was opened on December 5.

At the opening ceremony, Professor Wang Xiaoyang, Dean of SCS, presented Dr. Shen Xiaowei, Director of IBM Research-China, with the certificate of appointment of Chair of the Center’s first Technical Steering Committee. Dr. Huang Sheng, a leading authority of blockchains at IBM's China Research Laboratory, was appointed as Member of the Committee.

The fusion of information technology and economy and society has driven the development of the application of the Internet and the Internet of things. A blockchain, as a novel technology, can be used to record the complete process of value transfer in which allows no further changes, and is referred to as the most disruptive technology following the invention of the Internet.

In this context, the Center is established to join the powers of academia, industry, and society to conduct in-depth research into the technology. It is expected that the Center will be a leader in promoting the technology and thus make contributions to society.

According to Dr. Shen Xiaowei, blockchains are going to change people’s lifestyle tremendously. IBM Research-China, the first company actively involved in the Center, will make efforts in researching and initiating the effective mechanism so as to attract more institutions into this area.