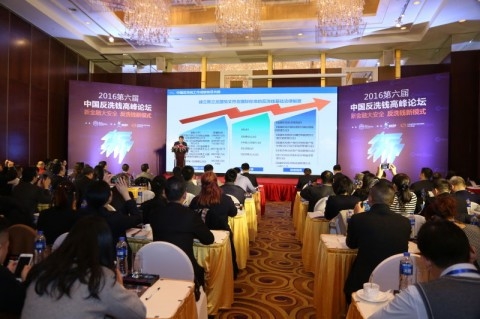 This year’s summit received support from the People’s Bank of China (PBC). Mr. Guo Qingping, Deputy Governor of PBC, delivered a keynote speech at the opening ceremony. He first made a review of China’s remarkable achievements in anti-money laundering (AML) during the past decade, and then he appealed to all for concerted efforts to brace ourselves for the unprecedented challenges ahead.

This year marks the tenth anniversary of the promulgation of The Anti-Money Laundering Law of China. In the past ten years, guided by PBC, China has established an integrated top-down AML framework in the spirit of the AML Law by gradually making specific regulations. Nevertheless, in the era of data technology, a succession of new methods of crimes has been emerging, such as money laundering through the Internet and terrorist financing. Digital payment and other new financial sectors gradually grow into the epicenter of money laundering. Therefore, how to ensure financial security against the background of new normal through new concepts, models, instruments and technologies has been the focus of regulatory authorities, professionals and academics.

CAML 2016 attracted over 20 AML scholars from Singapore, Taiwan, and mainland China and over 70 AML professionals from Ant Financial, Thomson Reuters, BOC, etc. They discussed the new features and trends of global AML, innovative AML regulatory models, how new technologies of the era of Big Data contribute to intelligent AML, the “One Belt One Road” initiative and terrorist risk control, cross-border business expansion and proactive compliance. The fruitful discussion offered a large number of suggestions and feasible plans to the regulatory authorities, financial institutions and specific non-financial institutions in their future AML.

Registered in PBC, CCAMLS was established in 2005 at Fudan affiliated to School of Economics. It is so far the only institution crowned with the title of “China” focusing on the study of money laundering and counter-terrorism financing in China.