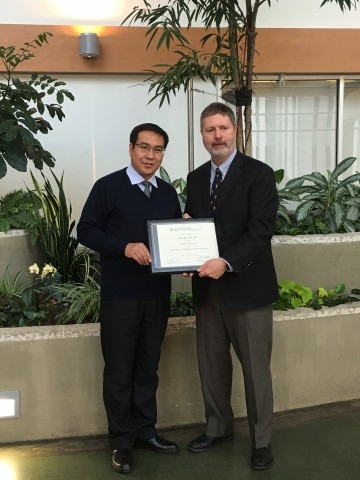 Professor Ta De’an at School of Information Science and Technology has been appointed Adjunct Professor by the University of Alberta, Canada, during his visit there from December 2 to 10.

He visited the Department of Medicine & Dentistry sponsored by the Walter. Mackenzie Visiting Speaker Fund. At the lecture themed “A novel ultrasonic instrument and application in skeleton assessment”, he expounded on the principles, methodology, equipment and application of ultrasonic backscatter bone diagnosis.

The University of Alberta is ranked among the top 100 in the world. The new role of Professor Ta is hoped to strengthen the collaboration between the two universities in discipline establishment, research and education.

It has been over one decade since the collaboration was established between the Medical Ultrasonic Lab at the Department of Electronic Engineering, Fudan, and the Professor Lawrence Le’s group at the Department of Radiology and Diagnostic Imagining at the University of Alberta. More than 20 papers have been published and nearly 20 scholars participated in the exchange program between the two institutions.