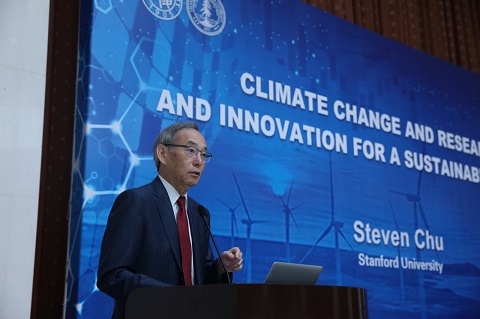 From August 12th to 13th, Professor Steven Chu was invited to visit Fudan. Professor Chu from from the Medical School of Stanford is Nobel Laureate in Physics, Academician of the American Academy of Sciences, Fellow of the American Academy of Arts and Sciences, and Foreign Academician of the Chinese Academy of Sciences. His academic reports centered around “bio-imaging” and “energy and climate change”. Also, Professor Chu communicated with Fudan teachers and students, sharing his view on academic pursuit.

“Is it possible to understand how cells signal within and between themselves, at the molecular level?” In the academic report on the morning of August 12th, Professor Chu focused on this issue. According to his introduction, his team has developed a rare-earth nanoparticle that can track proteins both in real time and on a long term, within the time scale of milliseconds. Also, the nanoparticle has excellent light stability. He talked about the application of these particles in axonal transport and shared the results of his latest research on linear ultrasound imaging. Professor Chu explained, "The reduction of speckle noise enables the ultrasound imaging to reach a theoretical diffraction limit resolution", and he also mentioned the results of nonlinear ultrasound imaging and compared the improved tissue with the unimproved one. Xu Ningsheng, Academician of the Chinese Academy of Sciences and President of Fudan University, hosted Professor Chu’s talk.

The next day, for hundreds of teachers and students from Fudan University and many high schools of Shanghai, Professor Chu delivered a public science popularization lecture on the topic of “Climate Change and Research and Innovation on a Sustainable Future”. The lecture was hosted by Jin Li, Vice President of Fudan University. Taking the development and evolution of environmental issues as an entry point, Professor Chu showed the audience the most up-to-date data on atmospheric concentration of carbon dioxide and climate change in recent years, and then extended his topic to energy. He introduced the rapid changes in related fields and many key academic contributions made by researchers including Chinese scientists.

Professor Chu’s research interests include atomic physics, laser and biophysics. In 1997, he won the Nobel Prize in Physics for developing the method of using laser to cool and trap atoms. The research laid the foundation for the later development of high-resolution laser spectroscopy and ultra-high-precision atomic clocks. Over the years, Professor Chu has devoted himself to the development of high-precision techniques for single-particle biological imaging and single-particle biological detection. At the same time, Professor Chu has also been involved in researches concerning energy and climate change and new batteries. He actively advocates the increased use of renewable energy and the development of clean energy to combat global warming.