On September 2nd, undergraduate freshmen of 2018 entered Fudan University and started their university life. There were more than 3,400 students from all over the country and more than 300 international undergraduate students from 46 foreign countries. On the same day, Lu Jing, Director of the Shanghai Municipal Education Commission, Jiao Yang, Secretary of the Party Committee of Fudan University, Gui Yonghao, Executive Vice President, Xu Zheng, Deputy Secretary of the Party Committee, Gou Yannan, Associate Vice President, Xu Lei, Associate Vice President, and other heads of relevant departments came to the matriculation site and met the freshmen and their parents. They also expressed their warm regards to the working staff who received the new students.

More than 75 percent of the freshmen, who enrolled in Fudan University this year, was born after 2000.The youths of the new era have infused new energy to the campus and brought about a new trend. 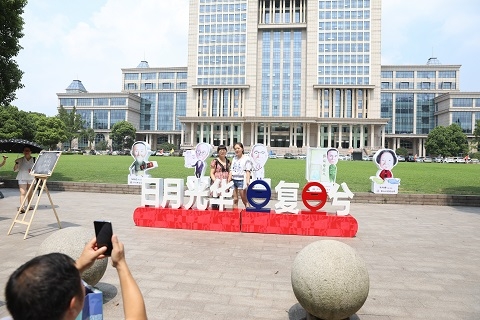 The culture of former presidents is the epitome of Fudan sages, which is an indispensable part of the Fudan tradition. It also provides Fudanese with soaring ambition and spiritual wealth. The five residential colleges, Zhide, Tengfei, Keqing, Renzhong and Xide, were named after the five famous presidents in Fudan's history. The five-color windmills and buntings of the Colleges blow in the wind. The banners, with the cartoon images of former presidents designed by students, tells the story of Fudan. Students have also designed the slogan using characters from the names of the five colleges. In order to welcome the newcomers, the campus is redecorated, and the post-95 senior students have prepared a series of gifts with care and creativity to generate a sense of belonging for the new students. 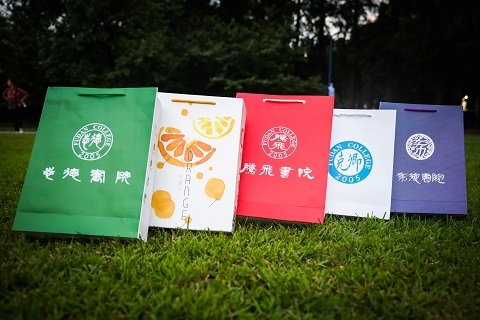 Notebooks, notes, pens, bookmarks, paper bags, pencil cases, card holders, folding fans - all these gifts are designed by students on their own. There are a series of creative stationaries under a unified theme, featuring the five colors of the colleges and the former presidents. The products make up "College Gift Package”, including many beautiful, practical and colorful gifts for the freshmen. The cartoon image of former presidents drawn by students became a popular group photo hotspot for the post-00 freshmen on the orientation day. In the past year, the senior students have written and directed a series of “master plays”, centering around the story of the former presidents and Fudan’s history. These plays will be staged for the new students later in this semester.

“Welcome new students from all over the world!” - This is the slogan hanging above the University gate, which conveys the open and inclusive attitude of Fudan. This year, more than 300 undergraduate freshmen in Fudan are from 5 different continents and 46 foreign countries. Among them, more than 200 students are from countries along the “Belt and Road”. At Fudan, they can not only devote themselves to specialized studies, but also gain the opportunities to experience Shanghai and also China. During the matriculation period, five Orientation Sessions for Foreign Students, in both Chinese and English, helped foreign freshmen to learn about the University's academic requirements and the points for attention when they live in China.

In the orientation month, many other colorful activities are tailored for the international students. The Orientation Party on September 14 will provide a cultural feast for foreign students from different countries and in different grades, for them to embrace the new semester. September 16th is the “Shanghai City Exploration Day” for students awarded with the Chinese Government Scholarship, Shanghai Government Scholarship, and Confucius Institute Scholarship. They will visit the Shanghai Urban Planning Museum and tour around the Huangpu River, to better learn Shanghai's past and present.

This year, the undergraduate orientation system has been bilingualized for the first time. What is also bilingualized are services including enrollment education examination, freshman questionnaire, uploading of photo cards, pre-charging campus cards, etc. Foreign students need to deal with these issues online. The bilingual practice greatly facilitates the submission of relevant materials for newly enrolled foreign students, and also lays the foundation for providing service for more students in the future, especially those with majors or in programs taught in English only.

Foreign students, studying in a foreign country, are faced with the issue of cultural adaptation. In this regard, the University prepare beforehand. During the summer vacation, members of foreign students' associations, who are from Malaysia, Singapore, South Korea, Japan, Laos and other countries, returned to their motherlands and took the initiative to contact the freshmen of 2018. By organizing Fudan freshmen briefings, they helped their incoming students to learn more about the learning and living in Fudan, uncovering for them the coming journey of studying abroad in advance.