Since the epidemic outbreak, the city of Wuhan has been locked down for the prevention of disease transmission to other regions. During the lockdown, transport networks and outgoing flights were suspended to prevent the exportation of infected cases. A study published on March 6 in Science, titled “The effect of travel restrictions on the spread of the 2019 novel coronavirus (COVID-19) outbreak”, shows with data how closing down Wuhan has mitigated virus transmission. The research was conducted by an international team of scientists, including Matteo Chinazzi from Northeastern University (USA), M. Elizabeth Halloran from University of Washington, and Yu Hongjie, professor from the School of Public Health, Fudan University, etc. The study shows that the quarantine measure in Wuhan slowed down the progression of the disease by 3 to 5 days in Mainland China, while reducing by 77% case exportations from China to the rest of the world until mid-February.

The researchers adopted the Global Epidemic and Mobility Model (GLEAM), which combines real-world data on populations and human mobility to deliver analytic and forecasting results on the impact of epidemics. They also calibrated the model based on internationally reported cases to project the impact of travel limitations on the national and international spread of the epidemic. They divided 200 countries and regions into over 3,200 sub-populations, each centered around a major transportation hub.

As it is still uncertain when the first individual was infected and how many cases were exposed to the virus in the beginning, the researchers hypothesized the epidemic’s started between Nov. 15 and Dec. 1, 2019, and that 40 people got the disease from animals.

According to the study, due to the Wuhan travel ban, the overall reduction of cases in the Chinese mainland excluding Wuhan is close to 10% by 31 January 2020, with a relative reduction of cases across specific locations varying in a range from 1% to 58%. 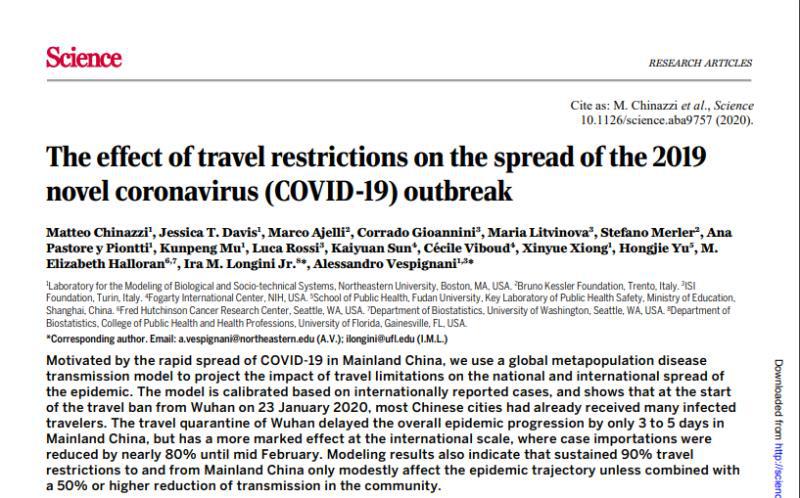 It’s worth mentioning that despite the common belief that international airline companies made belated responses to the virus as many of them only started canceling flights to and from China after Jan. 30, when the World Health Organization (WHO) declared COVID-19 a global public health emergency, the research finds that the sustained 90% travel restrictions to and from the Chinese mainland only modestly affect the epidemic trajectory unless combined with a 50% or higher reduction of transmission, through early detection and isolation of cases, as well as behavioral changes and awareness of the disease, in local populations. This shows the important role of Wuhan travel ban which started from Jan. 23.

The researchers conclude that transmission-reduction interventions may provide the greatest benefit to mitigate the epidemic. Other countries must step up their efforts as the study also indicates that a large number of infected cases in China have travelled internationally without being detected.