Recently, the research group of Prof. Xiu Faxian and Prof. Yan Hugen from the Department of Physics, Fudan University and the research group of Prof. Yi Shi from the School of Electronic Science and Engineering, Nanjing University have collaboratively discovered a unique electromagnetic response, namely dynamic chiral anomaly, in Weyl semimetals. Their research finding was published in a paper titled “The discovery of dynamic chiral anomaly in a Weyl semimetal NbAs” in Nature Communications on March 6th (Nature Communications 11, 1259 (2020)). The paper was also highlighted in “News and Views” of Nature Physics (Xi Dai, Dynamical Anomaly, Nature Physics (2020), DOI: 10.1038/s41567-020-0844-6”).

Think of a box that contains equal number of particles with opposite chirality. Whenever one opens the box, there will be the same number for the left-handed and right-handed particles. This is called chiral symmetry. But such symmetry might be broken upon quantization.

In condensed matter physics, there is a special class of materials called Weyl semimetals. The quasi-particles in Weyl semimetals, just like Weyl fermions in free space, are chiral fermions. Fermions of opposite chirality appear in pairs in solids. Therefore, this kind of material can be seen as a box filled with left- and right-handed particles. The chiral symmetry will be broken under an external magnetic field, which causes chiral anomaly. Strictly speaking, chiral anomaly describes the breaking of chiral symmetry produced by relativity fermions under quantization. In the transport measurement, it generates a chiral magnetic current along the direction of electric and magnetic fields, resulting in an observable negative magnetoresistance.

The above-mentioned scientists achieved the dynamic chiral anomaly by combining the built-in electric field of phonon and external static magnetic field. Once the AC electric field generated by the lattice vibration is parallel to the external magnetic field, a dynamic axial chiral magnetic current can be generated. The accumulation effect of this current combined with the strong electro-phonon coupling in the system posses an observable effect on phonons. This idea was first proposed by researcher Dai Xi. Using phonon related techniques, such as Raman spectroscopy and infrared spectroscopy, researchers first determined the phonon behavior in zero-field in Weyl semimetal NbAs (zero-field infrared spectroscopy is provided by Professor Wang Nanlin). A certain phonon mode cannot be detected by infrared spectrum at special crystal orientation under zero field. Prof. Dai Yaoming at Nanjing University previously found that such phonon exhibited strong electro-phonon interactions, which made it possible to observe the dynamic chiral anomaly in this system.

Using infrared magneto-optical spectroscopy, researchers observed that this infrared invisible phonon gradually became infrared visible with the magnetic field increased, which agrees with the prediction of dynamic chiral anomaly. Then a series of controlled experiments with different angles and different configurations were carried out. The researchers found that the phonon charge generated by the magnetic field was parallel to the magnetic field direction, so it could only interact with electromagnetic waves polarized in the same direction. Similar features were also observed in Dirac semimetal cadmium arsenide and it showed the same trend with the magnetic field. In this study, the dynamic chiral anomaly was achieved for the first time in Weyl semimetals, providing a foundation for the future study of electromagnetic response and applications of topological semimetals. 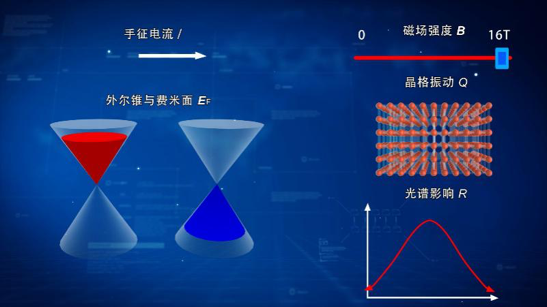 The dynamic chiral anomaly in NbAs

This research was carried out by the groups led by Xiu Faxian and Yan Hugen at Fudan University, Shi Yi at Nanjing University, Zhang Yi and Wang Nanlin at Peking University, and Xiaolong Chen at the Institute of Physics, Chinese Academy of Sciences. Dr. Li Zhilin from the group of Prof. Chen Xiaolong provided high-quality NbAs crystals which made the magneto-optical measurements possible. The work was funded by the Department of Physics of Fudan University, the State Key Laboratory of Applied Surface Physics, the National Key Research and Development Plan, National Natural Science Foundation of China, etc. The Department of Physics, Fudan University is the corresponding institution. Xiu Faxian, Yan Hugen and Shi Yi are the corresponding authors. Yuan Xiang, Zhang Yi and Zhang Cheng are the co-first authors. An animation video of this research can be found on Prof. Xiu’s website: http://www.physics.fudan.edu.cn/tps/people/fxxiu/