On March 9, 2020, the STAR international collaboration published its latest measurement on antimatter hypernucleiin Nature Physics, titled “Measurement of the mass difference and the binding energy of the hypertriton and antihypertriton” (DOI: https://doi.org/10.1038/s41567-020-0799-7). The principal authors of this paper include Yugang Ma, Jinhui Chen from Fudan University, and Peng Liu from the Shanghai Institute of Applied Physics, Chinese Academy of Sciences. Jinhui Chen and Peng Liu are the co-corresponding authors. This paper reported the precise measurement of the masses of hypertriton and antihypertriton. By measuring the mass difference between hypertriton and antihypertriton, the CPT symmetry was verified in the hypernucleus sector with precision of 10-4 for the first time around the world. The Lambda hyperon binding energy of (anti)hypertriton was also extracted from the mass measurement, and it shows larger value than the previous measurement available about 50 years ago. The larger Lambda hyperon binding energy suggests stronger hyperon-nucleon interaction, which is different from the scientists expected early.

The Relativistic Heavy Ion Collider (RHIC) located at the Brookhaven National Laboratory, accelerates the gold ion to the energy of 100 GeV per nucleon, and then two beams collide with each other in the center of the STAR detector. The secondary particles created by such collisions can be recorded by the STAR detector. Researchers analyzed the high statistics data sets collected by STAR detector in 2014 and 2016, and eventually found about 156 hypertriton candidates and 57 antihypertriton candidates out of about 4.4 billion gold + gold collisions by reconstructing the invariant masses of hypertriton and antihypertriton via its mesonic two-body and three-body decay channels. Thanks to the Heavy Flavor Tracker (HFT), a component with very high precision tracking capability of STAR detector, the excellent invariant mass distributions with almost free background were obtained. The HFT is originally designed to study the heavy flavor physics, now innovatively used by Ma’s team for the (anti) hypertriton measurement with great success, see the following figure for illustration. 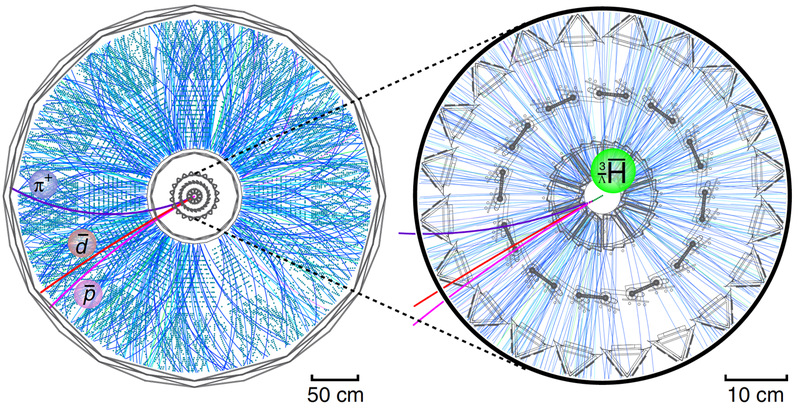 Figure. A typical antihypertriton candidate which experiences three-body decay in the detectors.

Symmetry is common in nature. For a long time, it has been thought that all physical laws follow symmetry. Tsung-Dao Lee and Chen Ning Yang first proposed in theory that parity is not conserved in weak interactions. Subsequently, Chien-Shiung Wu experimentally confirmed the parity violation, and in 1957 the Nobel Prize in Physics awarded the discovery of parity violation (P violation). After that, physicists quickly discovered the charge-parity joint violation (CP violation) and won the Nobel Prize in Physics. In history, the discoveries of parity violation and CP violation greatly promoted the development of physics. At present, CPT theory believes that all physical processes are invariant in the joint reversal of charge, parity, and time, and thus predicted that matter and antimatter have the identical mass. The physics community has been trying to find the signal of CPT violation experimentally, and has verified CPT symmetry by measuring the mass differences between various hadrons and antihadrons. However, measurements between nucleus and antinucleus are rare.

Ma’s team and collaborators had already discovered the antihypertriton (Science-2010) in 2010, the antihelium-4 nucleus (Nature-2011) in 2011, and measured the antiproton interaction in 2015 (Nature-2015). However, due to the limitation of the experimental accuracy at that time, the accurate measurement of basic physical parameters such as the mass difference between the matter and antimatter was not feasible. In the current study, the major contributors, Jinhui Chen and Peng Liu of Ma’s team accurately measured the mass difference between hypertriton and antihypertriton, and thus verified CPT symmetry in the hypernuclei sector with precision of 10-4 for the first time in the world. This is also the heaviest antimatter verified by CPT symmetry so far. The results will place constraint to the parameters of the Standard Model Extension.

This work is in part supported by National Natural Science Foundation of China (NSFC), Chinese Academy of Sciences and Ministry of Science and Technology.