Fudan alumnus Thomas Derksen, or Afu as his Chinese fans call him, makes vlogs about his and others’ life in Shanghai to entertain million of Chinese every week, building a cultural bridge between China and Germany. 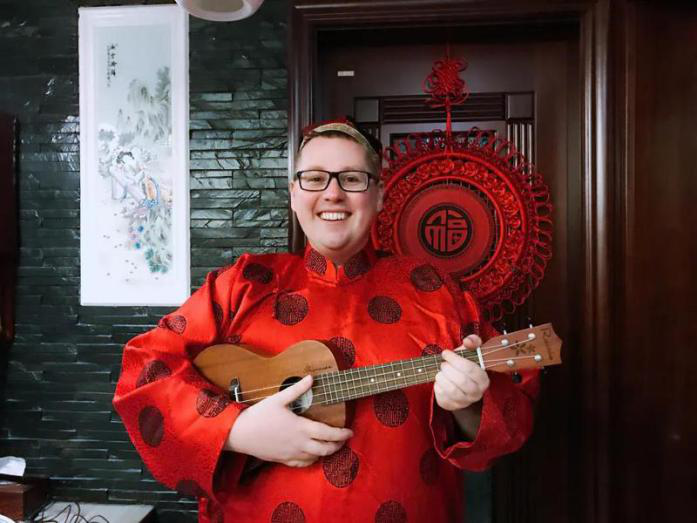 Thomas Derksen is a German alumnus of Fudan University who studied at the International Cultural Exchange School. But to his Chinese audience, he is best known as the German vlogger who posted videos of comedy sketches comparing the family customs of Cologne and Shanghai as he is happily married to a local Shanghainese. With his easy-going personality and sense of humor in the vlogs, he has been loved and celebrated by many Chinese viewers in Shanghai.

Though few people know that Thomas Derksen’s full Chinese name is 德福龙 (De Fu Long in pinyin), many have certainly heard its shortened version 阿福 (A Fu), which means fortune or luck.

This catchy name won him favors from many senior citizens whom he chatted up to in his vlogs. Thomas’ videos feature all-round stories on the here and now of Shanghai, highlighting the lives of the locals of different ages. This has made him stand out from other video producers. We can say Thomas is a one-of-a-kind influencer as he probably has the largest audience of different ages in Shanghai.

To understand how he started as a Fudan student and became a popular video producer in China today, one needs to know a little bit about his youth life. 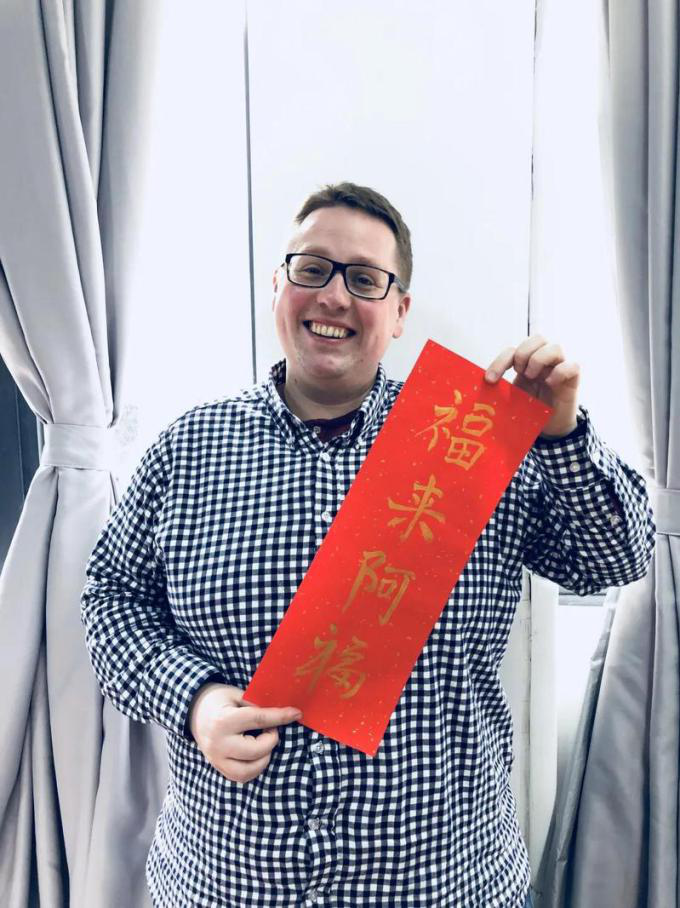 Thomas holds a couplet with his Chinese nickname 阿福 on.

Hailing from Cologne, the largest city on the Rhine. In 2005, when Thomas was a high schooler, he took a course on Chinese language and culture, which was taught by a teacher with a PhD. in sinology. Attracted by what the teacher said about China, Thomas became interested in this oriental country and started learning Chinese with this teacher.

In 2007, with the money earned from a part-time job, Thomas travelled with his teacher to China for the first time. They visited Beijing, Shanghai and Nanjing. During the travel, he was immediately fascinated by the profound culture, friendly people, unique landscapes and delicious food. The trip turned him into a big fan of China.

After graduating from high school and receiving professional training in banking, Thomas began working at a bank in Germany. While fulfilling his duties at the job, he gradually grew tired of his life being so predictable. “Is this really everything?” He kept asking himself. Having confirmed that this job wasn’t what his heart really yearned for, Thomas quit it and went to university to continue to pursue his interest in China. 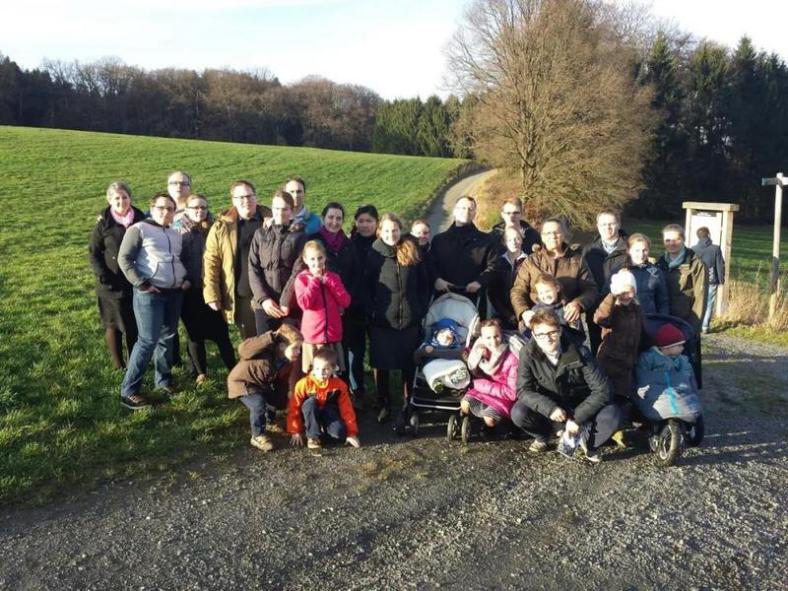 Thomas and his big family back in Germany

For the next 2 years, Thomas studied East Asian economics and politics as well as Chinese at Ruhr-University Bochum. Soon an exchange program at Fudan University came up. Given that Fudan was well-known in Germany and that his girlfriend Julie lived in Shanghai, he quickly decided to come to Fudan for the program. Thomas was the youngest of the six children in the family and his parents were very worried at first, but eventually they supported Thomas on his pursuit. 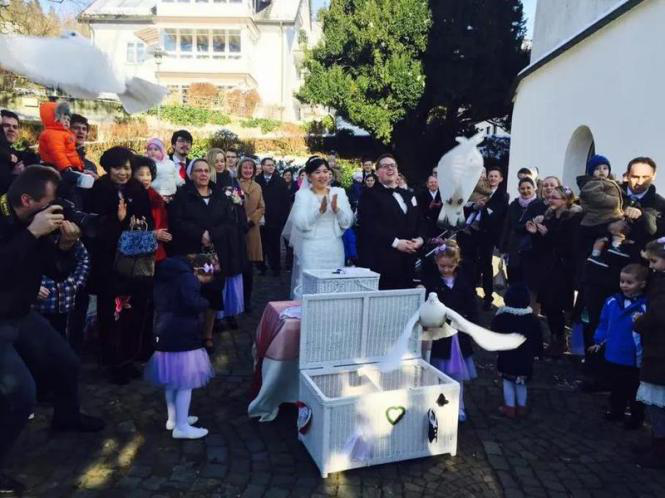 Thomas in wedding with his wife Julie in Germany.

In 2013, Thomas left for Shanghai, embarking on a new journey at Fudan.

Even though he had studied Chinese for several years in Germany, Thomas felt linguistically inadequate when thrown into an all-Chinese language environment. To catch up, visiting the library, memorizing new vocabulary, doing homework, and discussing language problems with classmates became his daily routine. 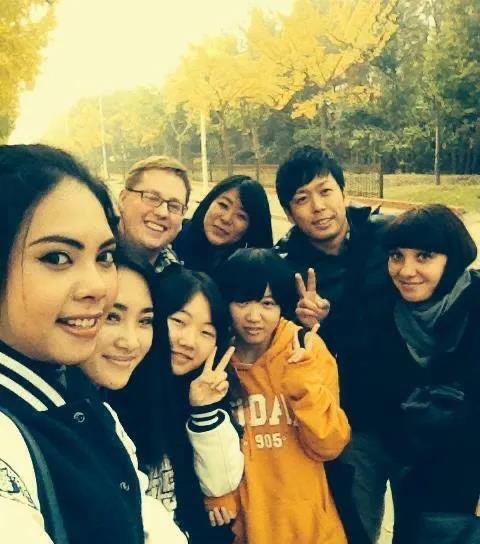 Thomas (1st from the left on the back row) and his classmates. 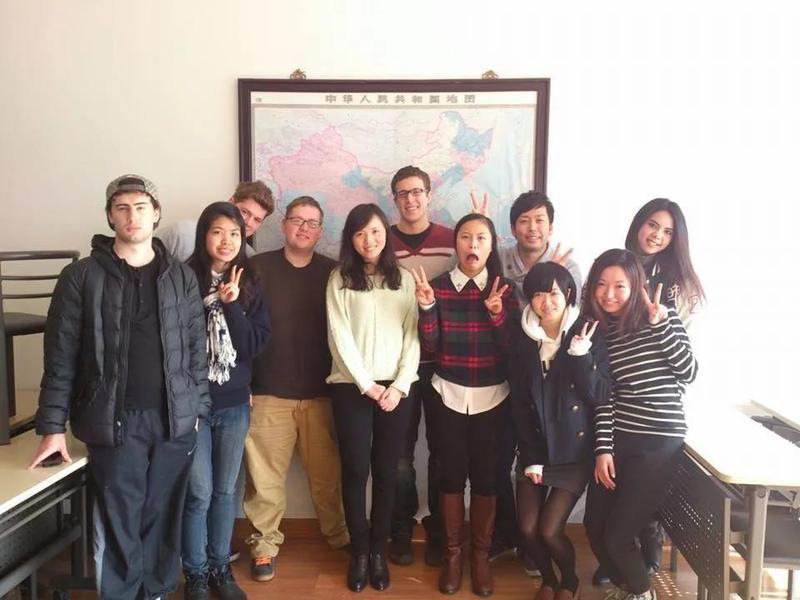 Thomas (4th from the left) and his classmates.

Like most Fudan students, Thomas participated in various activities in his spare time. He went on a local TV reality show called “生活大不同” (Sheng Huo Da Bu Tong) featuring young expats from different countries introducing their cultures and sharing their thoughts on China. During his time with the cast of the show, he improved enormously his language proficiency and won many loyal fans.

Thomas (4th on the left, back row) with the cast of a local TV show. Photo source: Weibo

Thomas has made many Chinese friends during his time at Fudan. Today, he keeps in touch with his professors and classmates through WeChat.

Thomas said that he missed the days at Fudan badly. For him, it was a productive, happy and innocent period of time. From time to time, he would return to the university, sitting on a bench in front of the Guanghua Towers or basking in the sun on the lawn, while watching students walk by. He said, every scene on campus reminded him of his own time at Fudan. 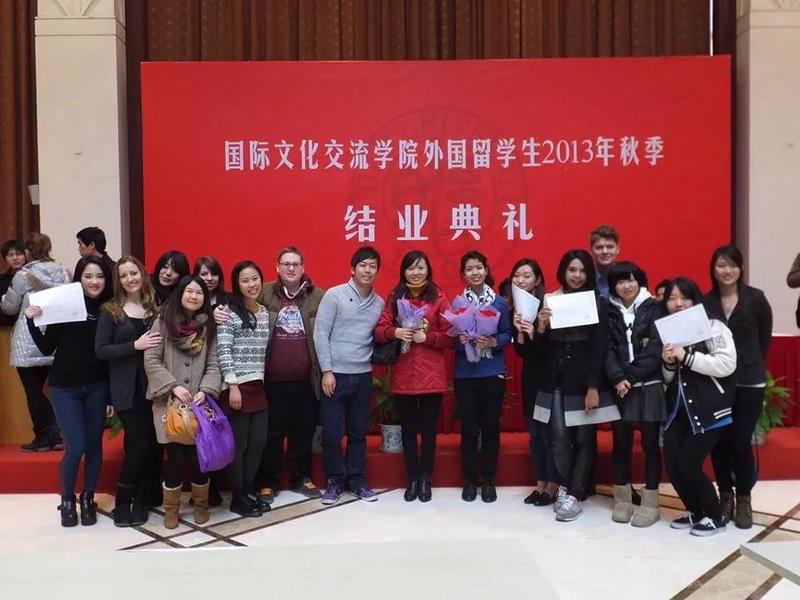 As the graduation day approached, Thomas had to consider whether to remain in Shanghai and if yes, what to do for a living after graduation.

“I found that many of my fellow Germans didn’t understand Chinese culture. Many Chinese also thought that German and other Western cultures were very strange. Stereotypes of Chinese and German cultures were common on the two sides,” said Thomas. To eliminate these stereotypes, he decided to show what his life was really like in China by creating comedy sketch videos.

In 2016, his first video, “What’s it like to marry a Shanghai woman?” went viral on social media. In the video, Thomas took on multiple roles, including his mother-in-law who previously pushed him and his wife to get married, his father-in-law who loved playing poker and mahjong, and his wife who allegedly was a little hard to please and fond of make-up. His fluent Shanghai dialect and hilarious roast lines on his family earned him fame as a video producer. This propelled him to continue producing videos to reflect on Shanghai customs in a humorous light.

Thomas’ channel was run only by him and his wife, both being very demanding about the quality of the videos. As time went by, they found it more and more difficult to come up with jokes. The couple realized that it was time for them to try deepening the themes of these videos, and decided to make vlogs where he would challenge himself to unusual tasks. Thomas’ audience expanded once again as people swarmed to his channel to see how he was going to complete these daring yet meaningful challenges. 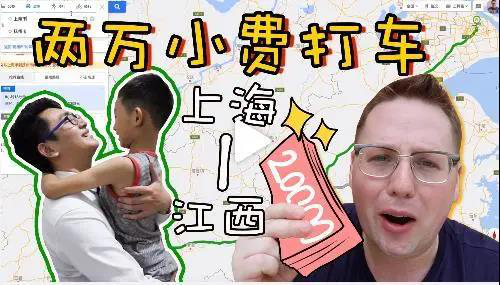 The cover of Thomas’ video titled “I tipped a Chinese taxi driver 20,000 RMB”

The vlog titled “I tipped a Chinese taxi driver 20,000 RMB” is one of Thomas’  favorite works. In this episode, he made a crazy request by asking a taxi driver to take him back to the driver’s hometown and show him around. On top of all the expenses on the way, a generous tip of 20,000 RMB would be given to the driver after they returned Shanghai. Mr. Zhou, a taxi driver was picked randomly by Thomas through a taxi-hiring app. Astonished and repeatedly checking that was what this blond foreigner really wanted, Zhou drove Thomas to Fuzhou city in Jiangxi Province, 700 kilometers southwest to Shanghai with 10 hours of driving. Setting off in Shanghai at dawn, Zhou managed to reunite with his family at night. The video went viral online.

This seemingly crazy challenge in fact mirrors the lives of millions of Chinese migrant workers like Zhou, who have left their homes in the countryside and went to big cities to make a living. Going back only once or twice a year, they miss their families a lot, but they are also full of determination and hope for a better life. Thomas’ lens has always been on “people” and “love”. Many videos created by Thomas as such not only shows non-Chinese viewers what is happening in the life of ordinary Chinese people, but also reminds his Chinese viewers of caring about the strangers around them. 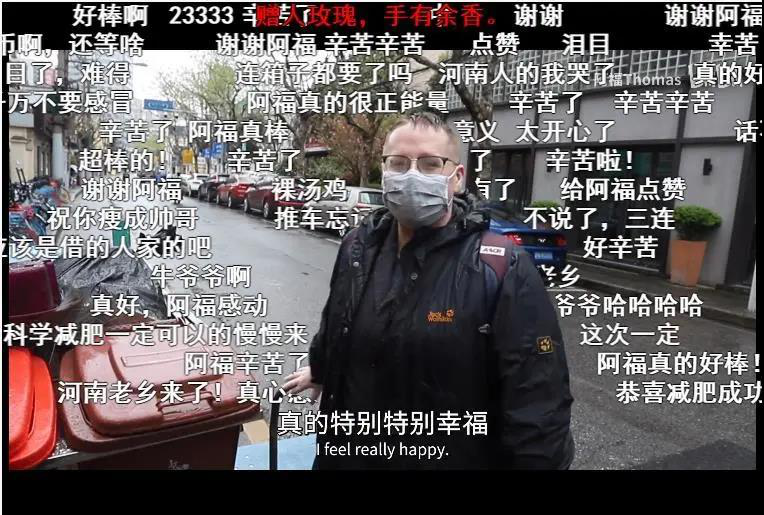 Bullet-screen comments such as “Thomas is full of positive energy”, “Thomas’ videos are so healing”, and “Watching Thomas’  videos makes me feel blessed to live in this beautiful world” on one of Thomas’  video.

On Bilibili, a Chinese video-sharing platform where Thomas has his channel, has a “bullet-screen” function where viewers can comment on videos and interact with each other while watching.  Thomas’  videos are usually scrawled with comments singing praise of him and his endeavors.

Fighting against the pandemic

During the COVID-19 pandemic, Thomas had to stay at home in Shanghai with his wife. In the meantime, he made several pandemic related videos.

At the start of the pandemic, rumors about impending shortages of food and soaring price of vegetables in China swept Germany, which deeply worried Thomas’ parents. Seeing these fake reports on the Internet, Thomas quickly filmed a video of a supermarket in his neighborhood to clarify the rumor and set his parents’ minds at rest. 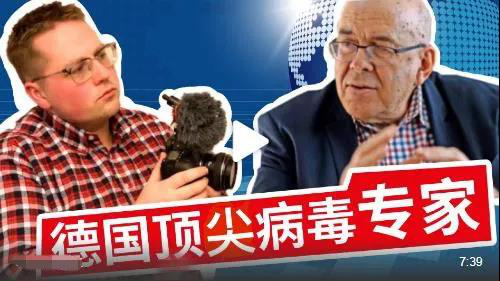 There was one video where Thomas invited Rolf Hilgenfeld for an interview. Rolf Hilgenfeld is a leading German virologist who had helped China with SARS in 2003. He was visiting China again to help fight the coronavirus. The interview informed Thomas’ Chinese audience on the necessary knowledge about the virus. This video had a great impact, ranking the 11th on Bilibili with more than 3.2 million views. 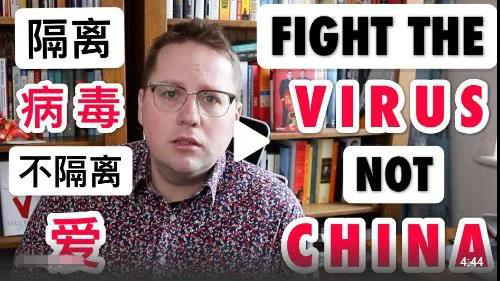 The cover of Thomas’ video “Fight the Virus not China”

In what seems like a rare circumstance, Thomas made a video where he spoke English throughout. He titled that episode as “Fight the Virus not China” and said, “Normally I speak Chinese or German in my videos. And even it’s not perfect, I decide to speak English in this video so more people can understand my message.” In less than 5 minutes, he described to the rest of the world how Chinese people united against the pandemic. He hoped that through his own experience, he could show the audience the real situation in China and enhance mutual understanding. “Don’t isolate China, isolate the virus,” said Thomas.

Living in Shanghai, Thomas has witnessed the entire package of prevention and control measures of the city. At the height of the pandemic, the community where he lives enforced strict mobility restrictions. Couriers were prohibited from entering residential units. Residents were only allowed to pass with a permit. Cleaners disinfected public spaces multiple times a day. Security guards checked the temperatures, registered for each resident and sort out parcels delivered to the gate of residential quarters. “These people worked really hard”, said Thomas. “Citizens are all very cooperative by putting on masks, keeping social distances and staying quiet in the subway. I saw Shanghai’s self-discipline and good governance through this pandemic.” 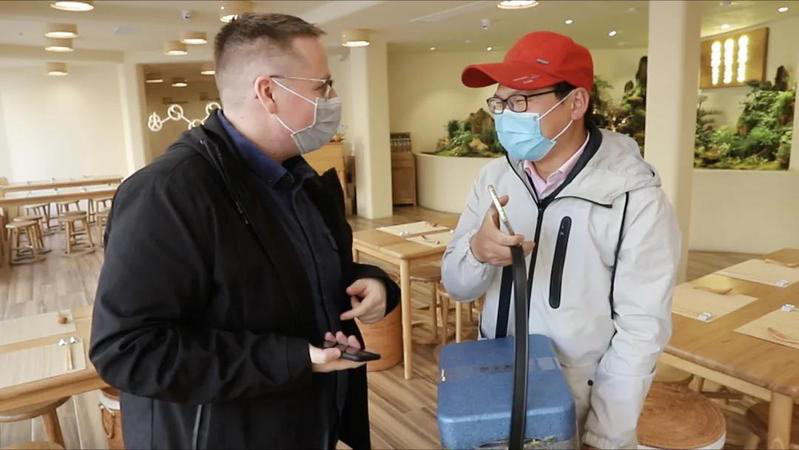 Thomas treats a delivery driver to a bowl of “Shanghai’s most expensive” noodles.

Noticing ordinary heroes, such as sanitation workers and food delivery drivers, who have worked hard despite the pandemic and helped the city function as usual, Thomas expressed his gratitude by bringing them gifts in his vlogs titled “I bought 15 KG of the best pork in Shanghai for street cleaners” and “Inviting delivery guys to eat Shanghai’s most expensive bowl of noodles”. His heartwarming videos appealed to people all over the world to fight the virus together, wherever they are and whatever they do.

“Compared to them, what I did is not worth mentioning,” said Thomas. 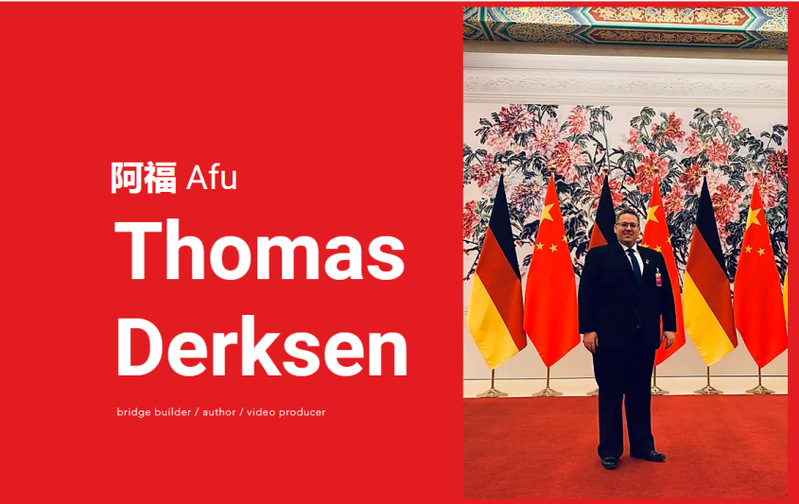 Through his lens, Thomas conveys sincerity, love and warmth to his audience. By engaging himself in the life of ordinary Chinese people, he dispels stereotypes and acts as a “bridge builder”—the title he gives himself on his personal website—between Chinese and German cultures. 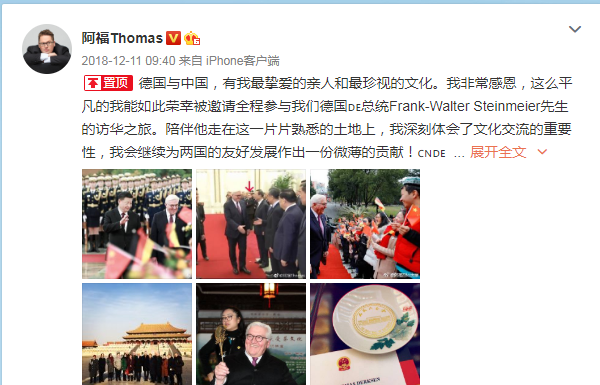 “Both Germany and China have my most beloved families and most cherished cultures...I will continue to contribute my bit to the development and friendship between the two countries,” Thomas posted a message on Sina Weibo, the Chinese equivalent of Twitter, in December 2018 and has since kept this post on the top of his page.

Thomas, as a Fudan alumnus, has grown from a young man from the Rhineland to an online influencer who exemplifies the Fudan motto of Service, Sacrifice and Solidarity through his words and deeds.