How a young Fudan journalist falls in love with Africa

Here we introduce Wu Yunong, 2020 Graduation Star of Fudan University and Rhodes Scholarship Finalist for China from the School of Journalism.

We talked to Wu Yunong on a Sunday afternoon in late June. Early that day, she had just finished filming a music video for the school’s commencement. Despite her tight schedule, Yunong kindly made time for this interview. 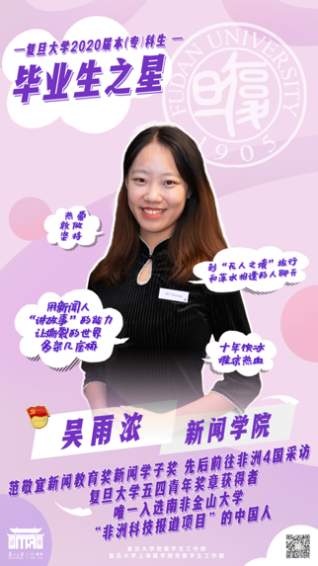 Yunong is from Shandong province. Her mother was an anchorwoman at Shandong TV station. Yunong took an interest in journalism at an early age. Every day after school, she would visit her at her workplace. There she observed the routines and procedures of TV production, developing a rough idea of how the media industry works.

A few years later, she became a kid reporter with Chinese Teenagers News, a national newspaper for teenagers. In the year of 2009, the National Games of China, the country’s premier sports event, was held in Shandong. The event was also when the Chinese 110-meter hurdler and Olympic Gold medalist Liu Xiang’s first official match happened after his withdrawal from 2008 Olympic Games due to his leg injury. “I wanted to be present at the games as a kid reporter, but sadly I didn’t get selected for it as a reporter, but my parents bought me a ticket so that I could get in as a spectator. They are the most supportive parents I could have ever hoped for,” said Yunong. As she recalled her childhood, she explained that her initial inspiration of being a journalist was the privilege to be on site when the news happened.

After her admission to Fudan School of Journalism, Yunong started working as a professional journalist for Fudan Youth, one of the largest campus-based magazines. She was also an assistant director of Fudan Channel U and chief editor of Fudanren Weekly. Both platforms are run by Fudan Students’ Union. “At Fudan I grasped the basic principles of journalism and officially set off to become a journalist,” said Yunong.

During her time at Fudan, she travelled to the least developed regions of China to reveal the plight of China’s ordinary people in their daily lives through her writing and photography. She interviewed parents with infants born with brain injury, petroleum workers in Chaidamu Basin, teenagers of ethnic minorities, etc. By talking to people from different backgrounds, Yunong had a better understanding of what difficulties her fellow compatriots were facing and was able to encourage her audience to cherish what they have and make endeavors for a better life. 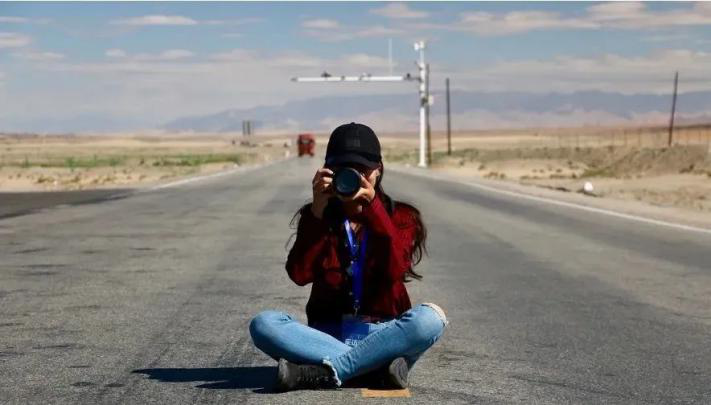 Yunong poses on an highway in the Qaidam Basin.

Yunong’s road to being a journalist is not always a smooth ride. “Sometimes you meet people who are willing to share, and other times you don’t,” Yunong chuckled.

“As I was working for Bingdian Weekly, a sub-column of China Youth Daily, I interviewed a man who taught at the Confucius Institute in Benin, a French-speaking West African country. He was on his way biking back to China from Benin. A local enterprise in Benin promised that if he made it, the enterprise would donate a generous sum to help poor Beninese villagers. With such an amazing story to tell, it was a pity that the man preferred to be a lone adventurer. He talked little and wasn’t keen on explaining what triggered his charitable action. It was difficult for me to get any substantial information from him. I’ve met a lot of interviewees like him. Going down this career path, at the end of the day, it’s something that I need to learn to cope with.”

As a journalist, Yunong travels with her interviewees, sometimes halfway across the world, to pass on their grievances and hopes. In 2018 and 2019, she flew to Africa thrice, visiting Kenya, South Africa, Ethiopia and Tanzania to explore the habitats of wild animals and look into the life of Chinese workers in Africa. 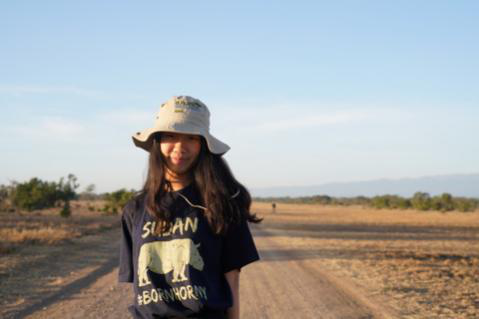 Yunong poses on a morning in Kenya.

“When I landed at Jomo Kenyatta International Airport, Nairobi, Kenya, it was 6:00 a.m. The airport was next to Nairobi National Park. The moment I walked out of the terminal building, I was struck by the majestic sunrise over the vast prairie before my eyes. During my travel across Africa, I found the people there were just so kind, hospitable and energetic. I absolutely love this continent.” 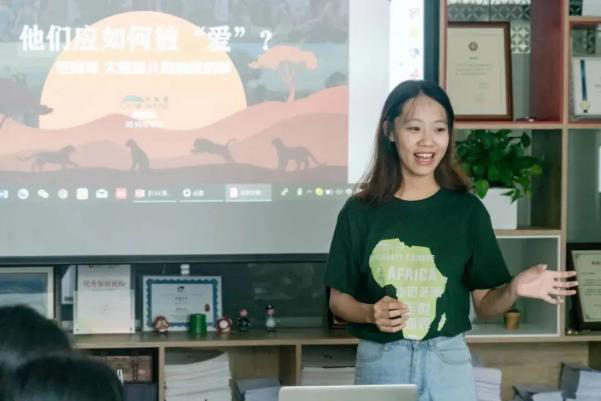 Yunong presents her project on caring for African animals.

There she filmed documentaries centering on Africa's animal protection. 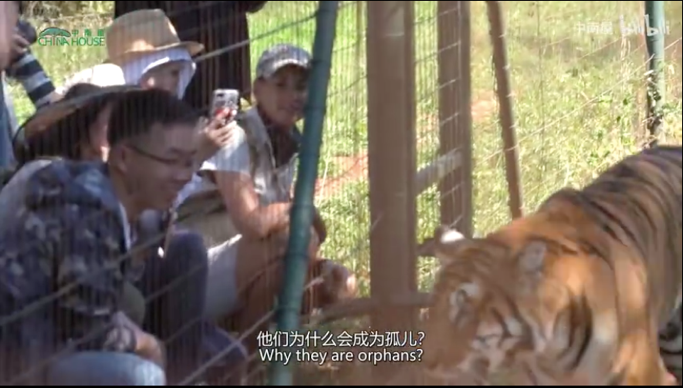 After returning from Africa, however, Yunong experienced a period of insecurity and confusion. She hesitated between her yearnings for Africa and the seemingly mundane life as a student. “I was so frustrated that I told my student counselor at the school that I needed to take a year off. But one of the best things about Fudan was that the professors and staff here were patient and open-minded. They really listened to me and helped me calm down. From talking to them, I realized that I was only a beginner in journalism and wasn’t ready for what I aimed for in the long term. Not to mention that there were plenty of things that I could learn and experience in Shanghai as well.” 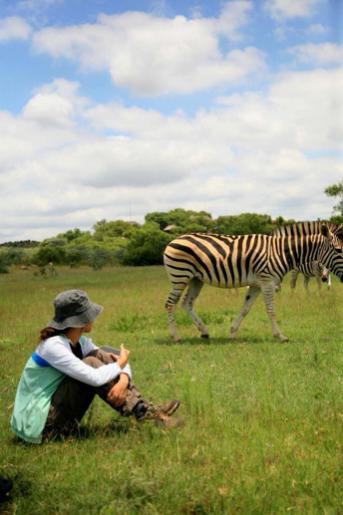 In the meantime, Yunong formed a deeper understanding of what it means to be a journalist. “I was born a curious and empathetic person. I was very often obsessed by sensational leads, thinking of all the buzz I could create with my piece. But it takes so much more to be a good journalist. For example, setting facts straight is more important than putting all the buzz I heard in my report. I need to check with multiple sources to make sure I have all the facts. I should do my best to leave my personal feelings out of my reports.”

Yunong believes that journalism is particularly relevant in today’s globalized world. People from different cultural and social backgrounds are more interconnected than ever. Meanwhile, it’s also become increasingly difficult for us to understand what people from other backgrounds are going through, due to the widening gap between rich and poor as well as the prevalence of unilateralism and nationalism across the world. 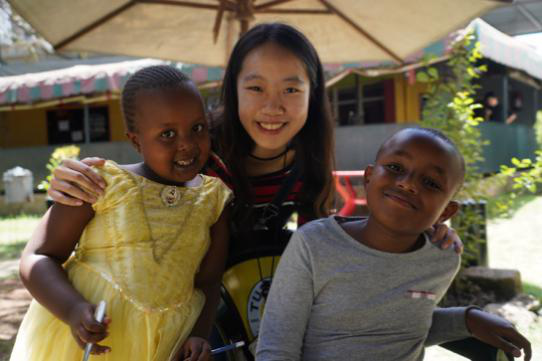 Yunong with local kids on her first day in Kenya

According to Yunong, journalists have an important part to play in global governance. “For example, during the pandemic, journalists risked their lives on the frontlines, keeping the public informed every new development.”

To fulfill that responsibility, she has also been writing for global media organizations. Her in-depth report titled “Flying in East Africa” (《飞行在东非:空难背后那些在埃塞俄比亚追梦的中国面孔》) that came out three days after the 2019 Ethiopian plane crash was the most read non-fiction article of the month on The Paper, a Shanghai-based online newspaper. Together with some other , The project, titled “The Map of Imported Cases of Covid-19 in Africa”, on which she collaborated with those who either were experts on Africa or lived in Africa, was later covered by news agencies including CGTN, Boomplay, The China-Africa Project, and Opera News. “Although I’m not a doctor, there’s at least something that I can do for this global crisis,” said she. 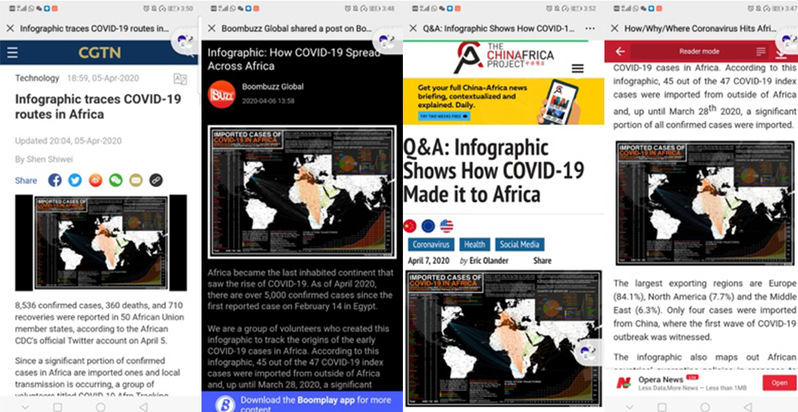 Yunong’s project “The Map of Imported Cases of Covid-19 in Africa” is reported by global news agencies.

From Left to right:

This July, Yunong has just completed her internship at Bloomberg News. Making use of her leisure time, she has been running a WeChat account called 非洲咨研 (Chinese Pinyin: Fei Zhou Zi Yan, English: African Research), a platform she co-founded that provides the latest news and produces analytical reports on politics, economy and society in Africa.

“I was glad that I was able to clear the misunderstandings of African people about China. That’s the point of conducting culture exchange and the duty of a journalist. I’ve also noticed there are many Chinese people who are curious but ignorant about Africa. So together with some like-minded individuals, I set up this WeChat account, hoping it would help.”

The homepage of WeChat account 非洲咨研 run by Yunong and her friends.

Yunong has determined to become a professional journalist reporting on African issues. In March she got an offer to work for an international children’s program in Africa, before it was unfortunately canceled due to the pandemic. “I used to be anxious about what to do in the future, rushing to finish what I’d planned and trying to figure everything out in a second,” she smiled and said. “But not anymore, because I know that sooner or later I will travel to Africa again. Before that happens, I will take my time, get ready and do what I can to help Africa from where I am.” 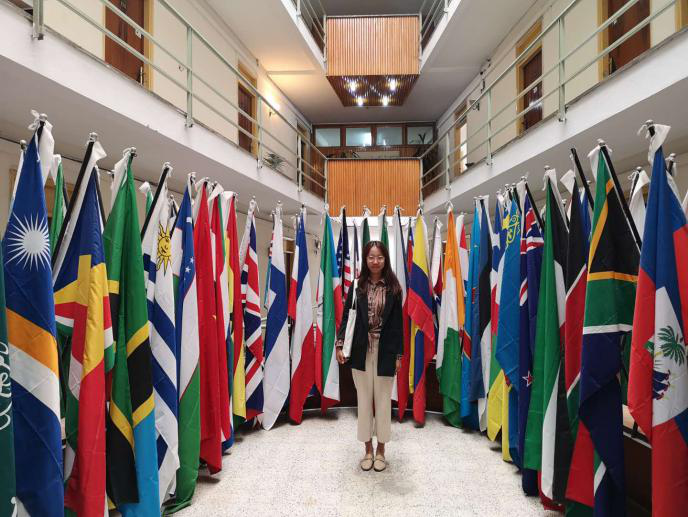 Yunong is invited to do field investigations for the Ministry of Foreign Affairs of Ethiopia.