Xplorer Prize 2021 winners were announced on Sept. 13, with 50 young scientists receiving the prize.

Initiated by Tencent Foundation and steered by scientists, Xplorer Prize aims to support the development of young scientists by providing generous bonus. In fact, it gives out the largest sum of prize money by all programs in China that fund scientists aged below 45. In 2020, Fudan’s physicist Yuanbo Zhang, chemist Liu Zhipan and biologist Lu Boxun received this prize. 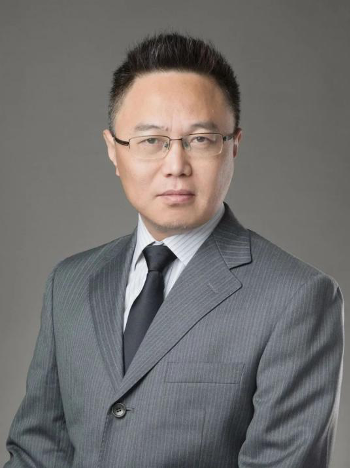 Weixiao Shen is a chair professor and deputy director of Shanghai Center for Mathematical Sciences, Fudan University. As a world-renowned scholar in dynamical systems theory, he leads the dynamical systems research team in the Center.

Dynamical systems as a branch of mathematics was invented by French mathematician Henri Poincare at the beginning of the 20th century. It sees the world as systems and tries to understand the geometrical properties of trajectories and long term behavior.

Shen has published a number of papers in world-class journals of mathematics, addressing many critical problems in the field of dynamical systems. The real Fatou conjecture of one-dimensional real dynamical systems, which he and his collaborators proved, was commented by Stephen Smale, an American mathematician winning in 1966 the Fields Medal, officially known as International Medal for Outstanding Discoveries in Mathematics, as one of the most important mathematical problems of the 21st century. In 2009, he became the youngest winner of Chen Xingshen Maths Prize awarded by the Mathematical Society of China. He was invited to deliver a 45-minute lecture (jointly with Sebastian van Strien) during the International Congress of Mathematicians 2014. 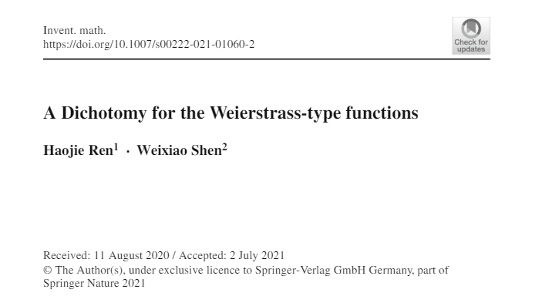 The numbers of dimensions that most people understand are generally integers, but they can be fractions as well, in the field of fractal geometry. For example, a snowflake, in the continuous interactions with the environment, is shaped into the beautiful form we see. The graphs of Weierstrass-type functions are something like the boundaries of snowflakes. Weierstrass-type functions are a class of continuous functions where derivatives cannot be taken. They are proposed by German mathematician Karl Weierstrass in the late 19th century. To understand the dimensions of such fractal functions is one of the research interests of many outstanding mathematicians devoted to dynamical systems.

The inspiration comes from a paper published in Inventiones Mathematicaein 2019 by Michael J. Barany and his collaborators who dealed with the dimension problem for Weierstrass-type functions constructed from the piecewise linear saw-tooth functions (instead of the cosine function in the original construction of Weierstrass). After reading the paper, Shen and Ren replaced the cosine function with a general periodic analytic function and solved the dimension problem successfully. 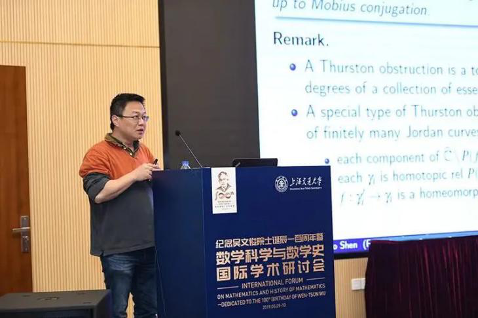 “Our time and energy are limited. And I choose to devote my mine to mathematics.”

“You need passion to get started on any subject,” said Shen. “But to achieve a certain depth and height in a subject, you need to be persistent.” As to winning the Xplorer Prize, Shen feels honored and sees it as an encouragement. 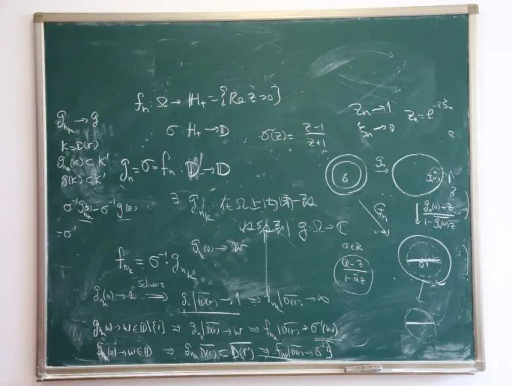 If you enter Shen’s office, you will see a blackboard scribbled with equations and calculations on a white wall.

If you enter Shen’s office, you will see a blackboard scribbled with equations and calculations on a white wall.

“I write on this wall to make the processes clearer for my students,” Shen said. Many of his undergraduate students frequent his office to discuss mathematical problems with Shen.

Shen believes that teaching can lay a solid foundation for research, and should be practiced regularly. For him, through teaching he reviews the structure of knowledge and improves the way he expresses the profound knowledge and his findings, which is of great benefit to his research and paper writing. 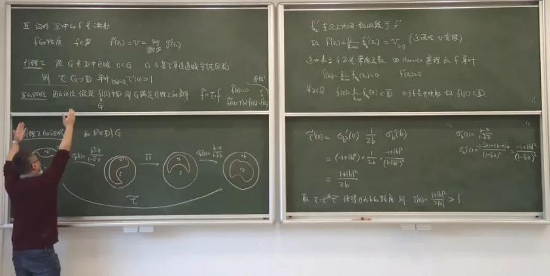 When he taught Real Variable Functions, he wrote more than 50 pages of handouts in English for this course. He insists writing on a blackboard to show his students clearer calculating processes as he believes only neat blackboard writing can show his thinking process in detail and in-depth. Before each lesson, Shen thinks over the course content again. “Only by constantly seeing the same old concept from new perspectives and test the feasibility of new approaches can I better adapt to the thinking processes of different students and allow them to learn more in my course.”

As for the education of future mathematicians, Shen said Fudan has given the students a good environment. They have the freedom in thinking wildly when approaching mathematical problems and are driven by moderate pressure. Shen also taught in Fudan’s newly launched Experimental Class for Mathematics Talents, a program that highlights reformed curriculum, personal tutor mechanism, research guidance and international exchange. He is very popular with the students in the Experimental Class as he motivates students with his experience and knowledge and acts as a role model in mathematical research for the students.