In the most comprehensive analysis to date, researchers found that the shapes of fingerprints—whether they are circular, wavy, or winding—are influenced by the genes responsible for limb development instead of skin patterning. The study, presented January 6 in the journal Cell, could help scientists better understand the association between genes and phenotypical traits in humans.

“People may wonder why our team is working on fingerprints,” says Sijia Wang, a geneticist at the Shanghai Institute of Nutrition and Health, of Chinese Academy of Sciences, and co-senior author on the paper. “We started the work purely out of curiosity. But later it turns out fingerprint pattern is associated with genes for limb growth, which are critical for fetal development. This provides another classic example of pleiotropy, when multiple phenotypes are interrelated to each other and are affected by the same genes.” 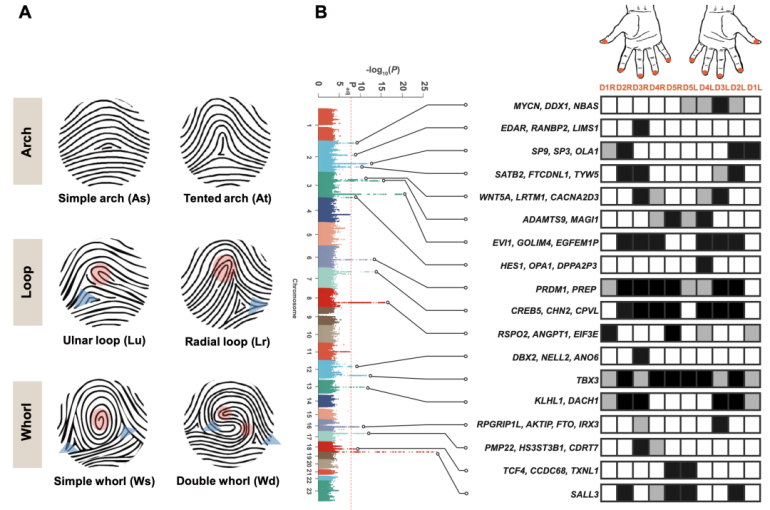 While fingerprints are unique to individuals, they are generally categorized into three types: arch, loop, and whorl. These furrows and ridges begin to form on a fetus’ fingers and toes after the third month of pregnancy. Scientists have suspected that fingerprints have potentially evolved to help grab objects and sense their textures, but exactly how these patterns are formed remains unknown. 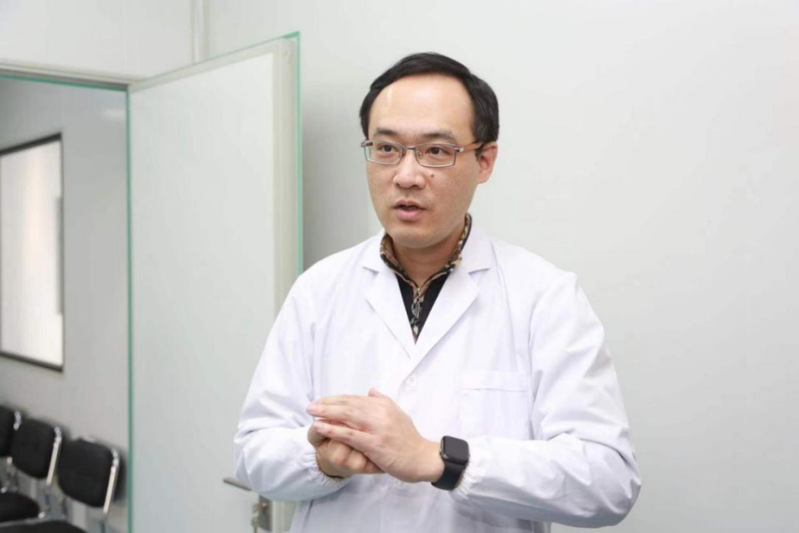 Wang and colleagues scanned the DNA of more than 23,000 people across ethnic groups and found that at least 43 regions on the genome are associated with fingerprint patterns. One of the most influential regions appeared to be regulating the expression of a gene called EVI1, which is known for its role in embryonic limb development. 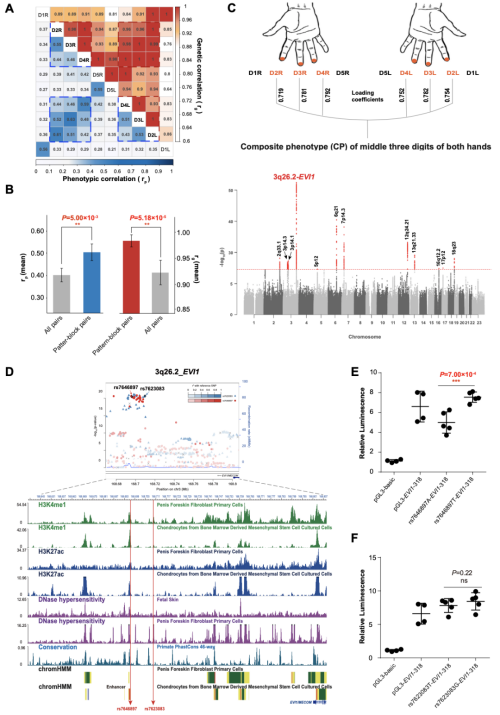 To test their finding, the team modified the DNA of mice so their expression of EVI1 was turned down. They found that mice with downregulated EVI1 developed abnormal skin patterns on their digits compared with wild-type mice. 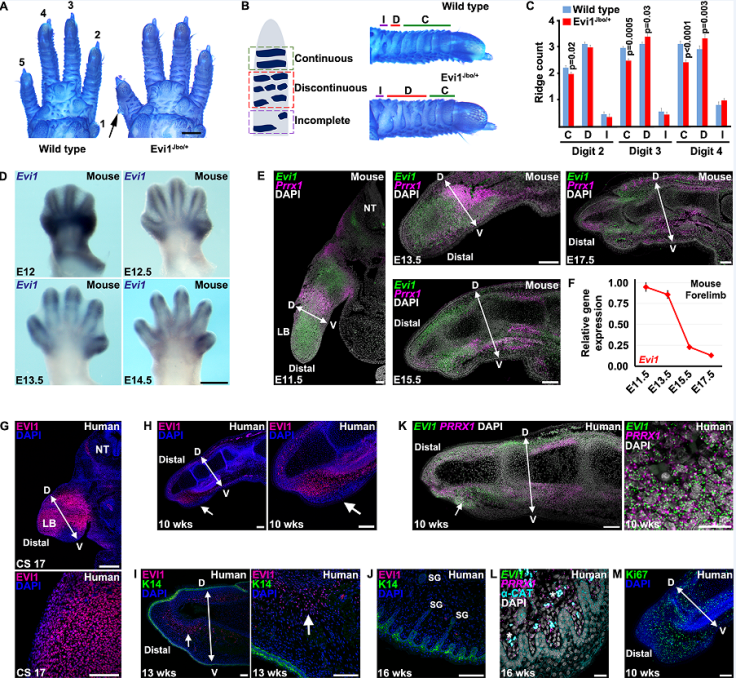 Analysis of human data revealed that fingerprint patterns are genetically correlated with finger length. For example, people with whorl-shaped fingerprints on both of their little fingers tend to have longer little fingers than those who do not, and this correlation is strongly linked to genes involved in limb development. 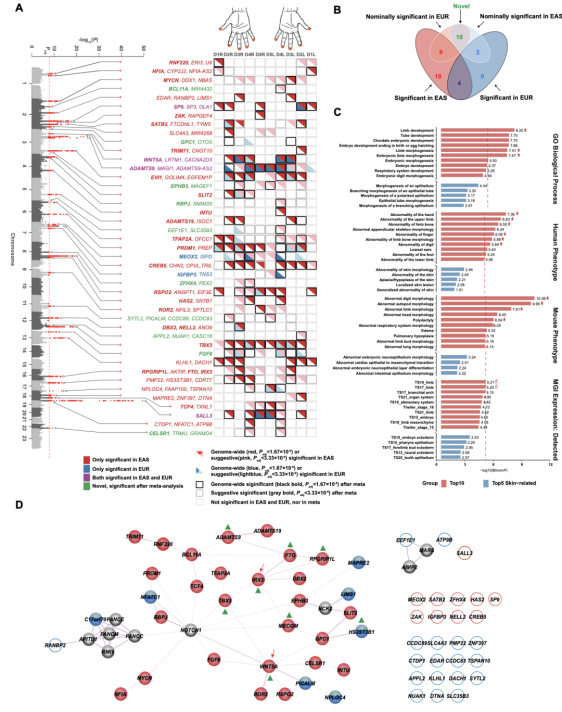 “We don’t know exactly how the genes shape fingerprint patterns, but it could be determined by the amount of strength from growth that’s put on an embryonic tissue called volar pads that plays an important role in the formation of different patterns of fingerprint,” says Jinxi Li, a postdoctoral researcher at the Human Phenome Institute at Fudan University in Shanghai, and co-first author on the paper. She explains that as a fetus’ hands grow, the palms and fingers would stretch and elongate. These forces could turn a whorl into a loop, for example. 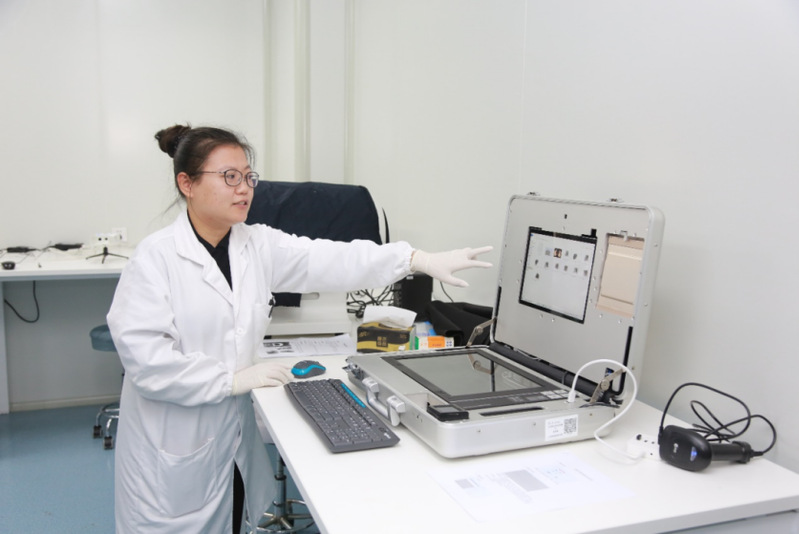 Notably, previous research has suggested that EVI1 is linked to risk of leukemia, and some studies have observed that people with more whorl patterns are more susceptible to the disease, Wang says. 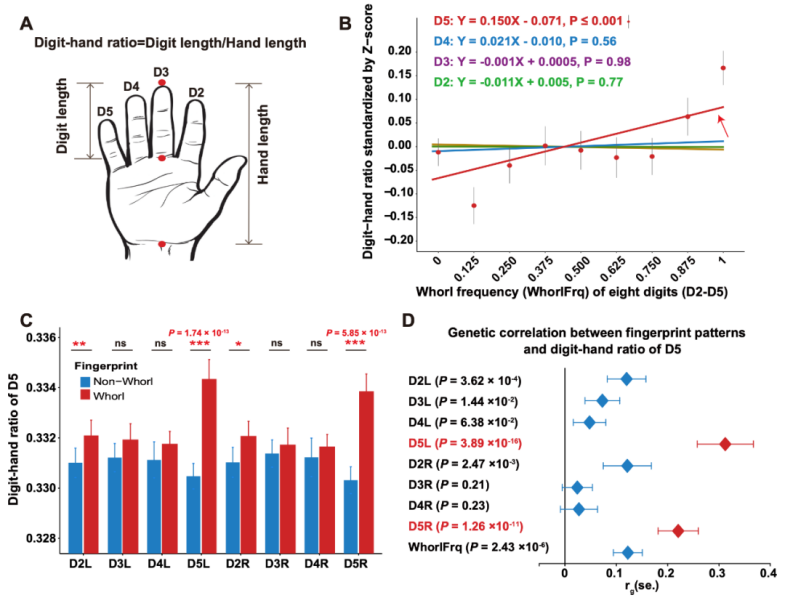 “Many congenital genetic disorders are related to different dermatoglyphic patterns, such as fingerprints,” he says. For example, children with Down’s syndrome are more likely to have the simian line, a single crease running across the palm of their hands. “Our study suggests that dermatoglyphic patterns are affected by crucial development genes, which provides a strong theoretical basis for this kind of pleiotropy.”

The study, as a good example in human phenome research, demonstrates the significant role of human phenomics in the development of life sciences, said Li Jin, CAS academician, president of Fudan University, dean of Human Phenome Institute, Fudan University, and co-senior author on the paper.

The research is part of the International Human Phenome Project led by Fudan University in Shanghai that aims to map how the human phenotypical traits are correlated with each other. Next, the team plans to conduct more research on how dermatoglyphic patterns are related to diseases and the underlying pleiotropic mechanism. 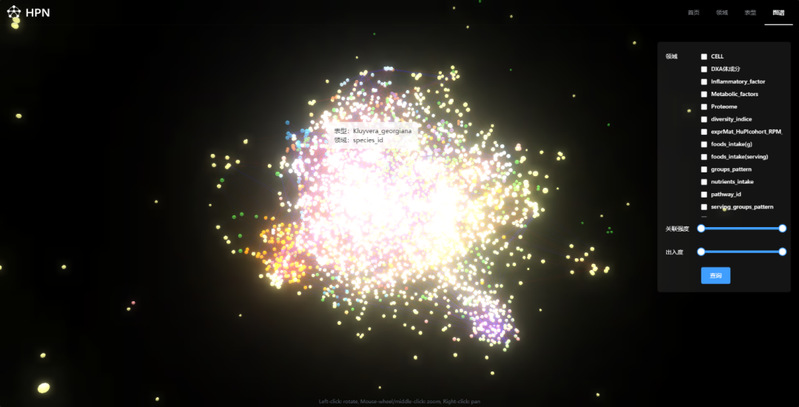 The primary goal of International Human Phenome Project is to draw the world’s first “navigation atlas” for human phenome which illustrates the associations between tens of thousands of different human phenotypes. Chinese scientists have drawn a preliminary atlas of human phenome covering and networking more than 1.5 million strong associations among different phenotypes based on Shanghai core cohort studies on residents’ health-related phenotypes so far. More than 800 volunteers have contributed their data with more than 30,000 phenotypes per person in the cohort study. With the atlas, scientists could make more innovative achievements in life sciences and better understand the various life phenomena. The atlas will also provide new directions and valuable clues for researchers to analyze the mechanism of complex living systems in the future.