Armenian brothers from Fudan volunteer for the Winter Olympics

Curtain came down on Beijing 2022 Winter Olympics just days ago. The grand sports event witnessed not only the excellent performance by athletes from all over the world, but also the dedication of countless volunteers. Among them, there were two Fudan international students who had worked hard to provide global athletes with quality service during Beijing 2022 Winter Olympics. 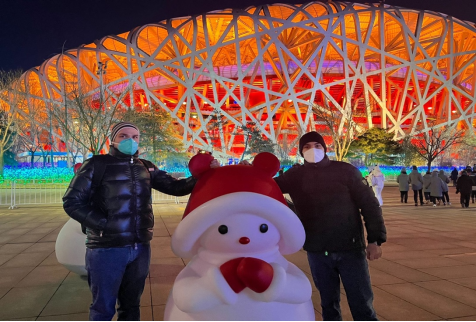 Vahan Geghamyan and Hayk Geghamyan, members of the National Olympic Committee of Armenia, are Armenian twin brothers born 15 minutes apart. Both of them are now seniors at Fudan. The elder brother Vahan is studying at School of Economics, and the younger brother Hayk the School of International Relations and Public Affairs. 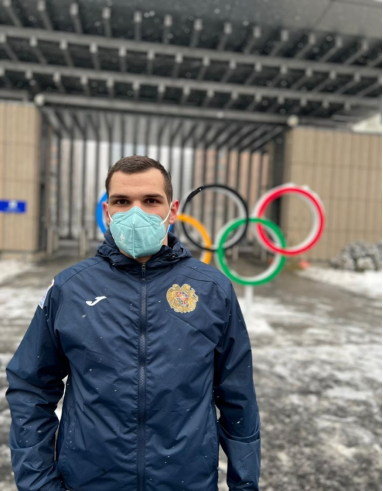 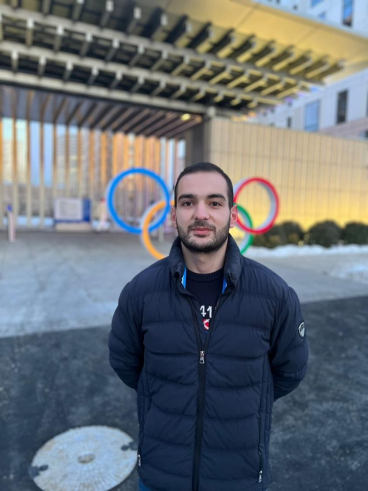 The brothers were chosen from hundreds of candidates to become volunteers for the Armenian delegation. Initially, they were assigned to the position of translators.

Vahan and Hayk started their jobs as early as the summer of 2021, reading official documents, completing translation tasks and joining online preparatory meetings with members of the Armenian delegation. As volunteers, they also needed to make preparations in advance to help athletes better adapt to Beijing’s “closed-loop” Winter Olympics bubble. After months of preparation, the boys were both very excited for the opening of the Games.

While everything seemed to be in place, unexpectedly, some of the volunteers serving the Armenian delegation were unable to come to China. In order to fill these vacancies, the brothers have to undertake a lot of administrative work alongside translation tasks. The extra workload and sudden changes of duties tested their adaptability and skills.

Their schedule in the Olympic Village varied from day to day. “The first week was really tense as we were just settling in. Our athletes were having 2-3 training sessions a day, and we had to juggle translation work and administration work,” said Hayk.

Many tasks were very complicated, but there was no room for mistakes. Their responsibilities also included the registration of the athletes and other members of the delegation, confirmation of their uniform for the opening ceremony parade, and all the paperwork. 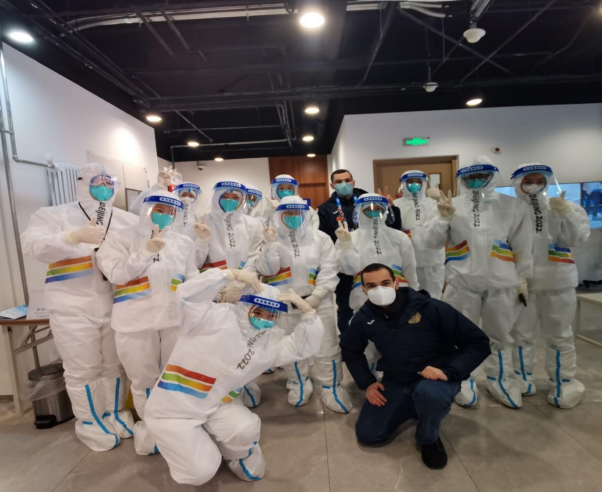 According to Hayk, in addition to their mother tongue Armenian, the brothers can also speak Chinese, English and Russian, which is also an important reason why they had the opportunity to serve delegations including Armenia and Belarus.

Despite their tight schedule and the restrictions imposed on everybody in this closed loop, the brothers enjoyed every second in the Olympic Village.

In the Olympic Village where high technology was ubiquitous, the latest technologies were adopted to not only help athletes make breakthroughs, but also bring convenience and fun to athletes' life in the Village. Vahan said it was fun to live in the Olympic Village, since it had everything one needed, and there were robots shuttling back and forth in the Village, providing information to passers-by. There were also canteens with robot chefs, which has gone viral on the Internet.

Something that was completely new to Vahan and Hayk is the tradition of exchanging pins in the Village, where villagers exchanged pins and attached the pins they have to the lanyard for holding their accreditation card.

“They are not accessories to remind me of one particular moment, but one that reminds me of the days I worked for Beijing 2022 Winter Olympics,”said Vahan. 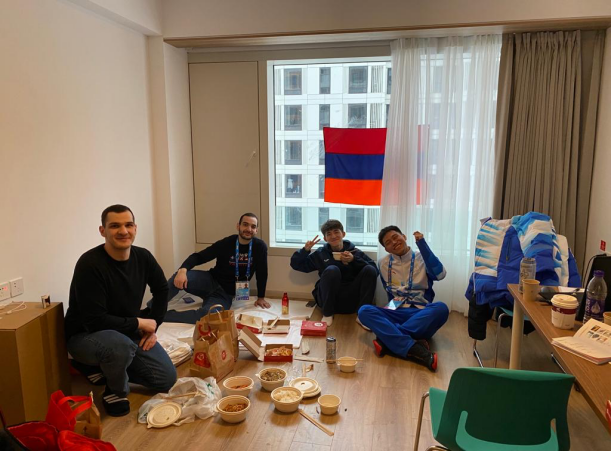 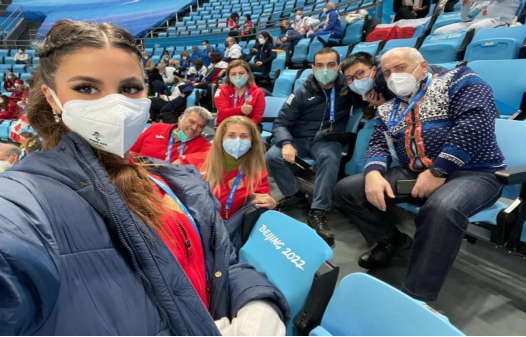 Hayk was fascinated by winter sports after talking to the athletes and watching games on the scene. He admitted that he had very little knowledge about winter sports previous to his arrival in Beijing. However, having the opportunity to witness the world’s top athletes compete live made him fall in love with winter sports. Freestyle skiing and figure skating have now become their favorite winter sports.

“The fact that people from all over the world can live under one roof, be united under the five rings, and at the same time always have their flags attached to themselves encourage us to hope that we can be ‘together for a shared future’.” Hayk said, the Olympics are the world’s most important sporting event, and being a part of it is a huge honour for them. The Olympic Games are prestigious because they bring not only the best athletes of each country together, but also viewers and fans together. The whole world watches the same event at the same time of the year, and people around the world are brought together by the values and messages delivered through the Olympics. 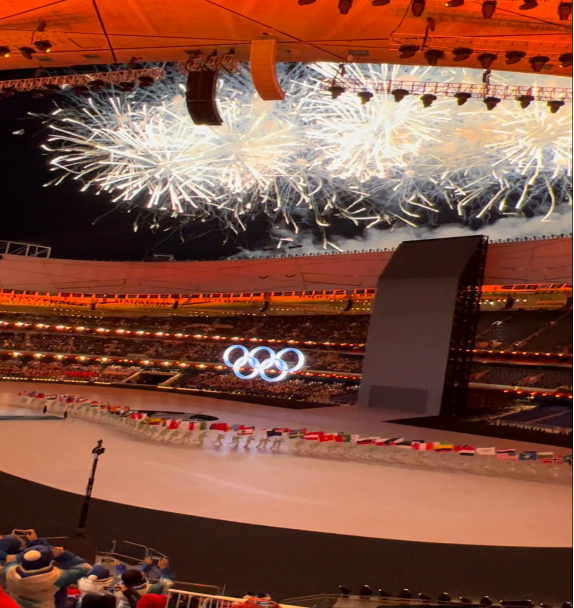 The Parade of Nations at the opening ceremony was the most unforgettable moment for the twin brothers. “We really hope that the Olympic spirit will transcend the games and stay as a reminder to everyone that we are all part of one huge family.”

When their quarantine in the Olympic Village come to an end in a week, Vahan and Hayk will soon return to Fudan for education. The brothers said they were very excited to go back to Fudan campus, since they have kept taking courses online for two years due to the pandemic.

In fact, at the beginning of their life in Fudan, the high academic standard and language barrier once imposed huge pressure on the two brothers, and they even considered transferring to another university. “It was very hard for me to learn Chinese.” Hayk smiled, recalling their freshman year.

However, with their progress in Chinese and the help of teachers and fellow students, the brothers gradually adapted to the new environment, and their passion for studying is growing year by year.

“At Fudan, I was exposed to a wide range of knowledge and discovered my interest in numerical economics and finance, which, in turn, shed light on the way that I am going to follow in the future.” Vahan said, he’s convinced that his decision of coming to China to pursue a bachelor’s degree is well justified, not only because of China’s rapid economic growth or the rich cultural heritage, but also due to the knowledge and way of thinking they’ve acquired here.

For the next step, the twin brothers intended to return to Armenia after graduation, and use everything they’ve learned in Fudan to help build a brighter future for themselves and their country.