Why do East Asians have more prominent cheeks and flatter nose?

What genetic factors underlie the striking differences in facial morphology between East Asian and European populations? Does natural selection play a role?

According to the paper entitled "Genetic variants in facial morphology in East Asian and European Populations", which was published in the journal Nature Genetics on April 7, researchers have recently applied a data-driven phenotyping and multivariate genome-wide scanning protocol to a large collection of three-dimensional facial images of individuals with East Asian ancestry (EAS), and carried out the association analysis between phenotype and genotype.

The study, led by Sijia Wang, a principle investigator at CAS Shanghai Institute of Nutrition and Health, and Li Jin, the CAS academician and dean of Human Phenome Institute, Fudan University, probes the hot spots of human facial phenotypic differences from the perspective of heredity and evolution, which reveals the genetic mechanism of some unique East Asian facial features, and also uncovers the genetic factors that cause the facial differences between European-ancestry cohorts (EUR) and EAS population.

Based on nearly 10,000 3D face images, the researchers developed a facial segmentation-based method according to the facial anatomical structure. The face was divided into 10 main anatomical regions, so that a facial phenotype obtained in this way can perfectly correspond to an anatomical region, making it easier for subsequent genetic analysis. 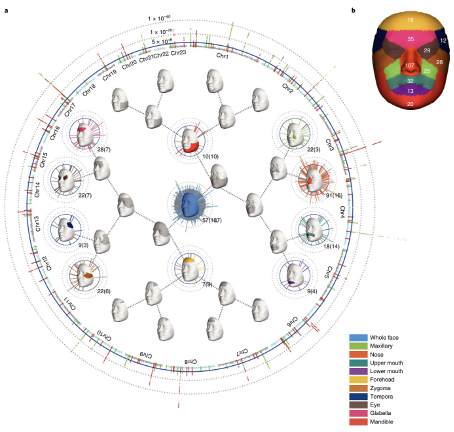 The study also revealed that facial genes were mainly enriched in enhancers of regulatory genes in the late embryonic development stage, and were involved in skeletal system development, regional pattern regulation and tissue development.

Notably, “rs6843082”, a locus affecting facial morphologic phenotype, has been found in the study to be significantly associated with the risk of atrial fibrillation, and it had been reported earlier to be associated with cardioembolic stroke and ischemic stroke, which suggests that facial phenotype may be a biomarker of cardiovascular disease. 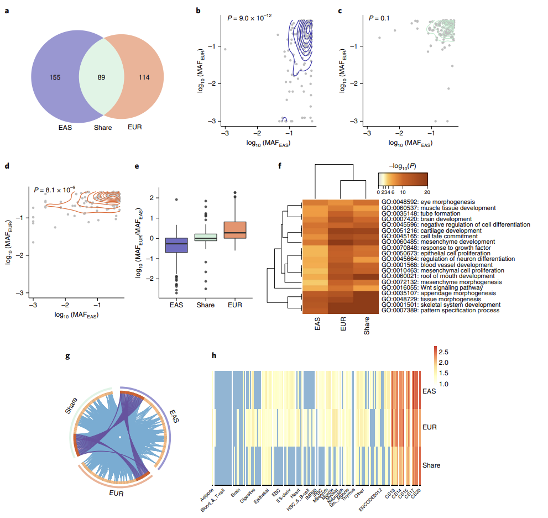 Compared with the EUR population, the EAS population has more prominent cheeks and flatter brows and nose. In order to explore the genetic basis of key facial differences between EAS and EUR populations, the research team extended the concepts of polygenic scores (PGS) to complex shape phenotypes for the first time, creating the polygenic shape analysis (PSA), providing a basis for visualization of facial features.

According to the study, the differences in actual facial morphology among EUR and EAS populations are highly consistent with the features simulated by PSA, and 13 genetic factors associated with facial features specific to EAS populations have been identified.

Based on various natural selection analyses, the study genetically explored selected facial regions and revealed that nose differences are likely due to adaptive selection in Europe, but genetic drift in East Asia.

Evolutionary analyses in this study suggest that the difference in nose shape between EUR and EAS populations is caused by a directional selection, due mainly to a local adaptation in Europeans. Therefore, researchers can analyze the ancient DNA and climate data in the future and establish a relationship between the evolution of nasal and brow morphology and climate change. 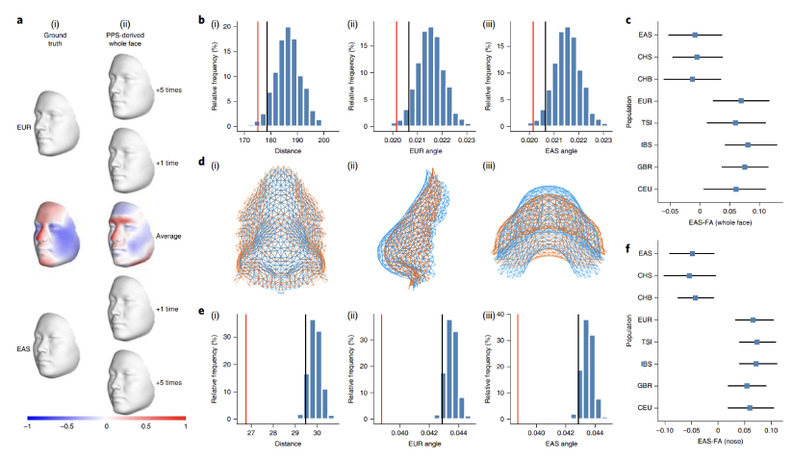 Li Jin said that as we are moving forward with the International Human Phenome Project, the study is a great example that shows the importance of phenomic concepts, paradigms and methods to life science research. The study elucidated the potential genetic basis of facial phenotypic differences in different populations and obtained new information on the facial phenotypic genetics of the East Asia population, which can help us humans gain a better understanding of ourselves.

Link to the paper: