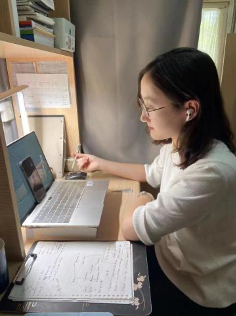 On May 14, Yang Kangqi, an undergraduate student from Shanghai Medical College of Fudan University, won the grand final of the International Public Speaking Competition (IPSC), where the best candidates from around the world spoke on the theme “We expect too much from our heroes”.

She’s also the third IPSC champion from the Chinese mainland after Liu Xin who won the competition in 1996 and Xia Peng in 2005.

“I'm elated to get such a good result. It's a great honor to make the voice from China heard on a global stage,” said Kangqi, who started with a story about her mother in the final, and appealed to the whole society to understand the real pressures of mothers and to embrace them as ordinary people with their own stories, emotions and dreams.

“We thought that the arguments that had the most interesting content and created the most thought-provoking ideas and challenge to combine with an excellent and engaging presentation was our speaker from China, Kangqi Yang, who made an effective and powerful performance,” said Chair of the judging panel Robert Buckland.

In the past two months, the site where Kangqi won the championship of the pre-selection, semi-final and final competitions was in fact her dorm room in the North Residential Quarter of Handan Campus due to the closed-loop policy. She kept in regular contact with her coach Prof. Shi Lina, who provided Kangqi with professional advice on her content and helped her polish the speech drafts.

“I am very grateful to my coach Prof. Shi Lina, who has always guided and encouraged me along the way since my freshman year. I would also like to thank all my teachers and fellow students for their support. And special thanks to my roommates for their tolerance, because in the last two months, it was quite noisy when I was doing prep work in the dorm,” Kangqi said.